Regarding a Dead Journalist

*** This is an old post, originally posted Monday, August 18, 2003. Michelle Malkin recently linked to it because it seems germane to the claim made by CNN's Eason Jordan that US troops target journalists in Iraq for killin'. Interesting, too, that it (coincidentally) mentioned Abu Ghraib well before anyone knew about Abu Ghraib. I worked hard on that post, too - it is the kind of thing that would have gotten me on MSNBC, had blogs been big back then - hard hitting stuff! =wink= These days, alas, no time to really research posts, so I just regurge. Pathetic. ***

Reuters cameraman Mazen Dana was shot dead by a US tank in Bahgdad this Sunday. Reuters paints the picture as follows:

U.S. troops shot dead an award-winning Reuters cameraman while he was filming on Sunday near a U.S.-run prison on the outskirts of Baghdad.

Eyewitnesses said soldiers on an American tank shot at Mazen Dana, 43, as he filmed outside Abu Ghraib prison in western Baghdad which had earlier come under a mortar attack.

Dana's last pictures show a U.S. tank driving toward him outside the prison walls. Several shots ring out from the tank, and Dana's camera falls to the ground.

The U.S. military acknowledged on Sunday that its troops had "engaged" a Reuters cameraman, saying they had thought his camera was a rocket propelled grenade launcher.

Several international media consortiums and (Dana was Palestinian) the "Palestinian street" are not so sure. They want a full investigation into the incident. I imagine the levelheaded among them just want to know what happened, the Leftist among them imagine some hyped-up GI getting his jollies by shooting someone, and the rabid among them imagine President Bush himself ordering all Arab-looking people shot ASAP.

Below appear a few pictures. Look at them, then ask yourself if the Pentagon's version of what happened makes sense - if maybe the guys in the tank thought they were about to be fired upon with a shoulder-mounted rocket launcher or RPG. 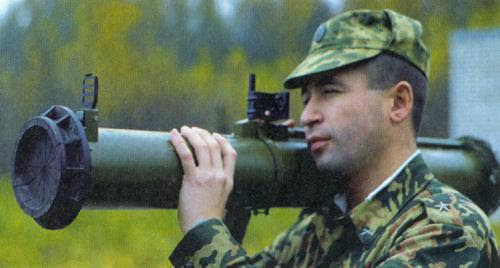 Soldier with a Soviet-made RPG-22

The RPO-A, it should be noted, is akin to a flamethrower. I doubt whomever is fighting the US in Iraq has them. It was, however, the only picture I could find of someone holding a shoulder-mounted weapon in the same stance and angle as Dana in his picture.

So - you're in a tank. Every other day, some soldier gets killed or wounded by an RPG or other shoulder-fired rocket attack. You're looking for bad guys, and you see a man with a device on his shoulder peeking around a corner. The device has a round aperture in the front and it is pointed at you.

What do you do?
Posted by Tim at 07:08
Email ThisBlogThis!Share to TwitterShare to FacebookShare to Pinterest