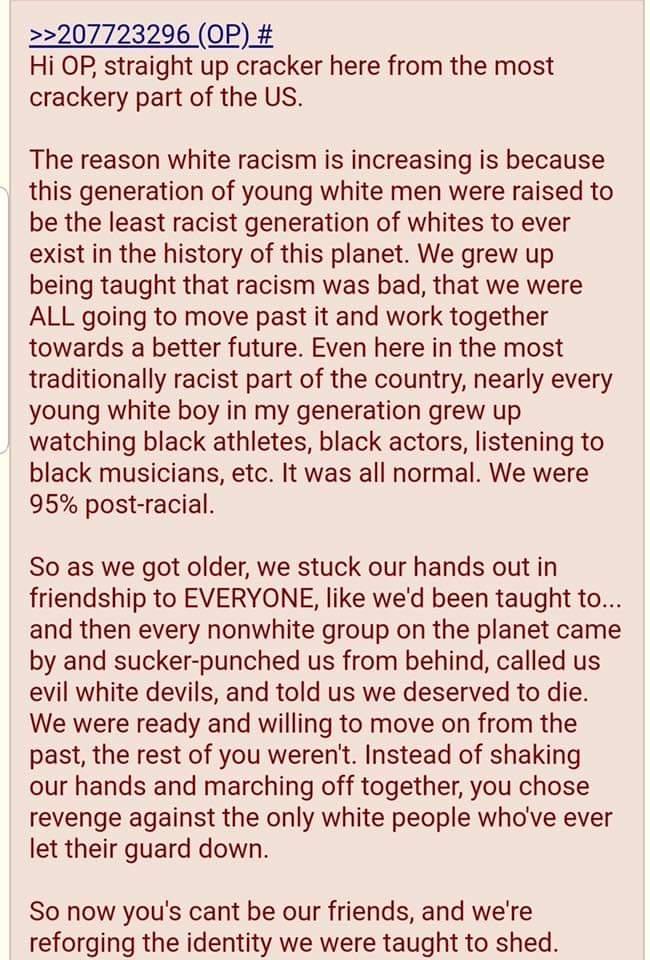 You can't tell generations of white men that they are everything that's wrong in the world, and expect that they won't group up to defend themselves.  To the left, White Men are evilracisthomophobichaternazis, and they've been preaching that sermon for just about my entire adult life.

Hell, the Left has come up with their own hierarchy of who they love the most based on skin color or race or religion or sexuality.  It's called INTERSECTIONALITY.  Muslims rate higher than blacks.  Black muslims rate higher than white muslims.  There's some confusion about whether gays rate higher than muslims, but they'll figure that out once they can determine how many votes each particular side can bring to the table.

But no matter what, white men are at the bottom of their scale.

White ethno-nationalist groups exist because we're told that every other nation in the world can choose who gets to live there.  Apparently, the message of "except you white nations" has fallen on deaf ears. Or it that message has just been rejected out of hand.

It's not just that white racism has been growing.  It's that white racism has been growing as a result of whites being increasingly marginalized, and told that we don't deserve to exist.  I grew up in a military household.  I'm still reflexively anti-racist.  But how many of my generation can say that they grew up the way I did?  Very, very few.  The Left has made identity politics their life-blood.  They shouldn't be surprised when the Right decides to play their game.
Posted by Ragin' Dave at 23:00
Email ThisBlogThis!Share to TwitterShare to FacebookShare to Pinterest
Labels: Politics, Racism?