One or two pictures

Just because I said I would. I'd love to have pictures that display some of the magnificant images that I saw, but you're SOL. I didn't bring my good camera because the dust and sand would have destroyed it. So I took my little POS camera, and it shows.

Ah well, that's life. Maybe in a few years I'll join the digital age. Until then, you have to deal with my little 35mm quirks. 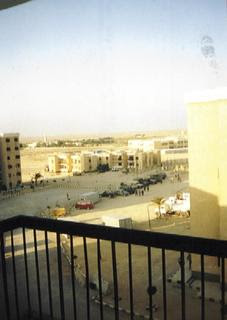 Welcome to camp. It's obviously much larger than this, but as I said I couldn't take many pictures there. If you look close, you can see a mosque in the back. For a better idea of where I was working...... 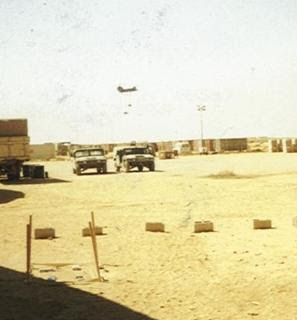 Imagine a flat stretch of dust, with a few quanset huts and lots of conexes. That was home for three weeks. By the way, the yellowish tint in the pictures is not a mistake. That was the actual color of everything during the day. And the Chinook in the picture is participating in slingload excersises. I had to shrink the picture a bit to make it fit on the blog (and not kill the bandwidth), otherwise you'd be able to see it better. 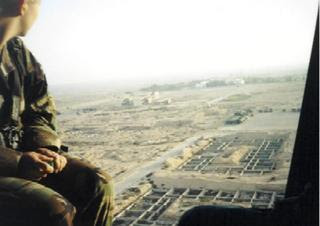 This was the view of the camp from a Blackhawk helicopter. Believe it or not, that was my first time on a helicopter, and the pilot was putting the bird through all of it's paces. Intense is the only word I can think of to describe it.

Anyways, that's a small sample of what I saw. Half of my pictures didn't come out very well, which is a disappointment. But that's life in the analog age, I guess. The next time I go anywhere I'll get a digital camera.
Posted by Ragin' Dave at 05:59
Email ThisBlogThis!Share to TwitterShare to FacebookShare to Pinterest