The blind eye that the Bush Administration turned to fraud at Enron and Worldcom didn't stop there.

Henze, an assistant vice president of finance, testified she told her supervisor, then-assistant controller Ken Livesay, that the big jumps "looked very suspicious" and that she suspected "something was going on."

Henze said she was transferred to the information technology division for about a year after reporting her suspicions of fraud, but she has since returned to the accounting office, where she is currently vice president of finance.

Nothing like the election of a Republican to bring out the greed in people...

Just back from maternity leave in spring 1999, Diana Henze said she noticed a $60 million jump in net income and a boost of 14 cents in earnings per share as quarterly reports were being put in final form. She'd noticed odd numbers in 1998, too.

Prosecutors allege [CEO Richard] Scrushy was behind a scheme to overstate HealthSouth earnings by some $2.7 billion from 1996 through '02. Scrushy made millions off the conspiracy by keeping stock prices high, they charge. 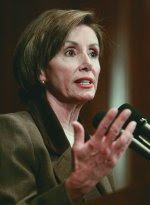 FOXNews.com - HealthSouth Witness: Fraud Suspected in '98
Posted by Tim at 15:21
Email ThisBlogThis!Share to TwitterShare to FacebookShare to Pinterest