Well, I aim to please! 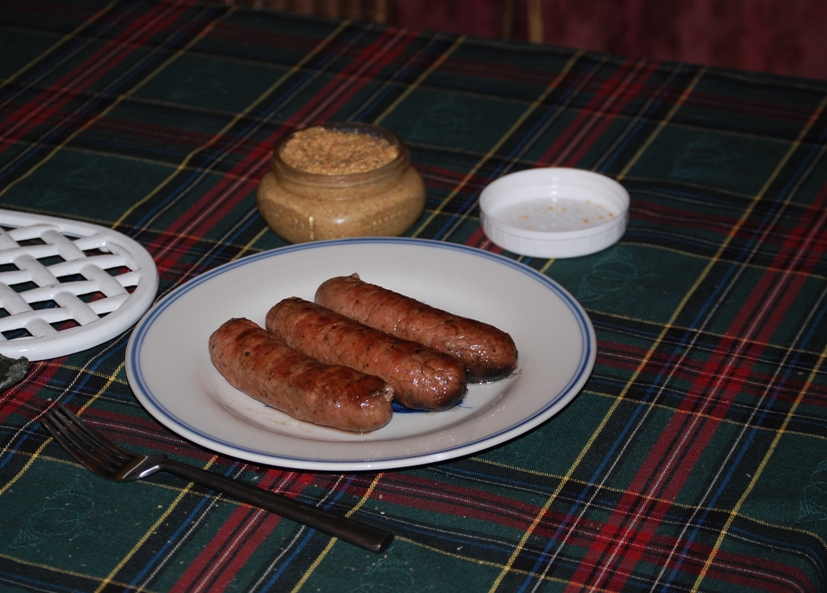 For those who labor under the idea that bratwurst has to be slathered with STUFF, and put on a bun, let me disabuse you of that idea right now.  The proper way to enjoy a bratwurst is with mustard and a hard roll.  Don't put the mustard on the sausage, you put a dollop of it on your plate.  You then take the brat in your primary hand, the roll in your off hand.  Dip the brat in mustard.  Take a bite.  Take a bite of the roll.  Take a swig of beer.  Repeat.

It.  Is.  That.  Simple.  That was beaten into my head by a man who ate many a bratwurst in Germany, and never ONCE was ketchup, onions, or any other condiment other than mustard served.  Cook the brats in beer?  What, are you trying to cover up a crappy flavor?  He DRINKS beer and EATS brats, and how DARE I try to ruin a brat by cooking it in beer!  If the flavor of the bratwurst is so bad you have to cover it up by cooking it in beer, you need better sausages!

Now, I've also had brats to me by a master butcher from Germany, served on a roll with ketchup, mustard and relish.  I guess you eat it how you like it, and everybody else can pound sand if they're upset.

Andouille, fresh from the smoker: 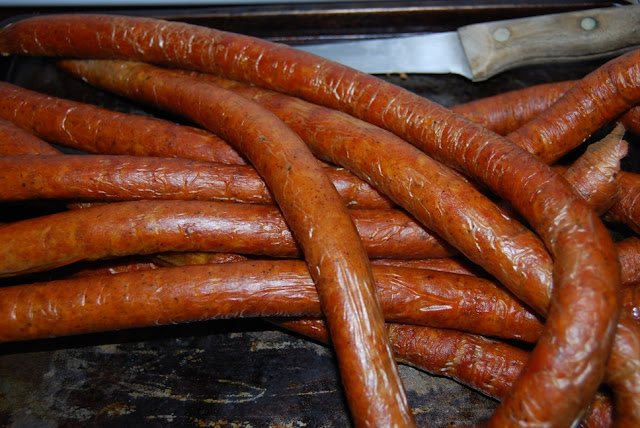 After it's smoked, you have to let it sit for a while for the heat to really build up.  But give it a week, and after you eat a bite the heat starts in the back of your throat and moves it's way up to your lips, until your entire mouth feels like you've swallowed a propane torch.  It's friggin' awesome.  Sliced thin, and used as a pizza topping?  Ohmygodgood.

I should note that actual Cajun andouille is thicker than this, but 1) I can't get real beef casing here, and 2) my smoker can really only cook a thin sausage.  Any thicker and it would still be partially raw in the middle, and that just won't do. 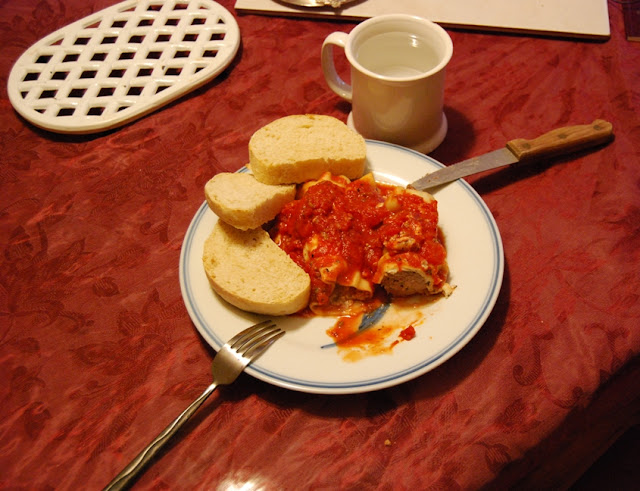 Note that the sauce and pasta are nothing but delivery vehicles for the sausage.  We make a hot and a medium-hot.  We used to make a sweet, but we found that we never really used it without adding some more heat to it, so we skipped the middle step and just make it hot.

Fergit all that pitchur stuff; when you gonna start sellin' it?
There's a guy who brings his homemade beef jerky into the local gunshop every now and then. I am happy to be there when he does and pay him $10.00 for a pound of it. Soaked in a natural brine and smoked - the best jerky I've ever had.

We um.... "gift" it to people we happen to know. Thanks to the myriad laws, regulations, hoops, and various bullshit in Wisconsin, we can't even sell our Spice Rub since we don't have a state-certified industrial kitchen to make it in.

"The proper way to enjoy a bratwurst is with mustard and a hard roll" You are kidding, aren't you? I have eaten bratwurst since I was about 6 or 7. The proper way, if there is a proper way, to eat bratwurst has been to eat it along with a serving of good sauerkraut or rotkraut and potato or bread dumplings or a good heaping portion of german kartoffel salad.

As to what to put onto the bratwurst itself, that would be german mustard, the variety with a good amount of horseraddish in it. Of course, you could also just use sliced pieces of the wurst to clean up the potato salad leavings or the kraut.

I tend to shy away from eating bratwurst on bread unless bread is all I have to go with it. Then I would prefer to eat it on a good corn rye or maybe with a good piece of Lithuanian rye. Of course, any bread can do (rolls included under bread). One of the best things to enjoy with a bratwurst, as far as bread goes, is a nice soft pretzel covered in salt. Of course, a good weissbier thrown in sure makes it all go down easier.

All the best,
Glenn B

Hey, take it up with him, not me! I cut it up and toss it with a cream sauce before pouring it over pasta, which I'm sure would damn me straight to some German version of Hell.