I'm going to copy this in it's entirety from Kim du Toit's site:

Luke AFB is west of Phoenix and is rapidly being surrounded by civilization that complains about the noise from the base and its planes, forgetting that it was there long before they were.

Apparently, an individual who lives somewhere near Luke AFB wrote the local paper complaining about a group of F-16s that disturbed his/her day at the mall. When that individual read the response from a Luke AFB officer, it must have stung quite a bit.

The complaint: “Question of the day for Luke Air Force Base: Whom do we thank for the morning air show? Last Wednesday, at precisely 9:11 a. m., a tight formation of four F-16 jets made a low pass over Arrowhead Mall, continuing west over Bell Road at approximately 500 feet. Imagine our good fortune! Do the Tom Cruise-wannabes feel we need this wake-up call, or were they trying to impress the cashiers at Mervyns early bird special? Any response would be appreciated.”

The response: Regarding “A wake-up call from Luke’s jets” (Letters, Thursday): On June 15, at precisely 9:12 a. m., a perfectly timed four-ship flyby of F-16s from the 63rd Fighter Squadron at Luke Air Force Base flew over the grave of Capt. Jeremy Fresques. Capt. Fresques was an Air Force officer who was previously stationed at Luke Air Force Base and was killed in Iraq on May 30, Memorial Day. At 9 a. m. on June 15, his family and friends gathered at Sunland Memorial Park in Sun City to mourn the loss of a husband, son and friend.

Based on the letter writer’s recount of the flyby, and because of the jet noise, I’m sure you didn’t hear the 21-gun salute, the playing of taps, or my words to the widow and parents of Capt. Fresques as I gave them their son’s flag on behalf of the President of the United States and all those veterans and servicemen and women who understand the sacrifices they have endured.

A four-ship Flyby is a display of respect the Air Force pays to those who give their Lives in defense of freedom. We are professional aviators and take our jobs seriously, and on June 15 what the letter writer witnessed was four officers lining up to pay their ultimate respects. The letter writer asks, “Whom do we thank for the morning air show?” The 56th Fighter Wing will call for you, and forward your thanks to the widow and Parents of Capt. Fresques, and thank them for you, for it was in their honor that my pilots flew the most honorable formation of their lives.

I doubt that the LTC would need it, but if I ever meet him I'm going to buy him a beer for that letter. And as for Kim's comment:

People who buy houses or otherwise live close to airfields or airports and then complain about the noise ought to be put in the stocks and pelted with rotten fruit.

I've never understood how someone can move to an area close to an airport and then have the gall to complain about the noise. Duh, you moron, you moved in RIGHT NEXT TO A DAMN AIRPORT! If you move next to an airport and expect it to be quiet just for you, then you're so damn stupid that you need to be castrated so that your defective genes don't pollute the gene pool for the rest of humanity.
Seriously... airports, when they're built, are constructed as far away from residential areas as possible. Nobody buys up a hundred acres of suburb and says "Yeah, we're building an airport right here!" No, they go out of their way to be out of the way. And then people rush out to buy land right next to the frigging place, because it's cheap (something to do with noise pollution?), and build homes, and then complain about the noise.
What. Fucking. Morons. What an utter waste of oxygen.
Second - if the sound of a fighter jet ripping through the air doesn't raise a thrill in your blood, then you are either A) Deaf, or B) quite possibly not American. It's the sound of power. The sound of superiority. Hell, I'd move next to an Air Force Base just to listen to the sound of those jets taking off in the morning. When the wife had surgery at Lackland Air Force Base, one of the biggest thrills for me was just seeing those jets in the air, and listening to them take off. Loud, yes. Obnoxious, maybe, it depends on who you are. But a thrill? Hell yeah. It's the reason I loved watching the Blue Angels at SeaFair in Seattle. 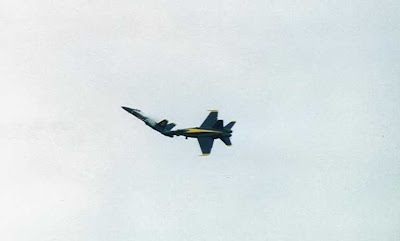 (click on the pic for regular size)
If people don't like jet fighters, then perhaps they shouldn't move next to an Air Force Base. Just a suggestion.
And yes, I took that shot of the Blue Angels. Not the greatest I've ever taken, but still.....
Posted by Ragin' Dave at 06:20
Email ThisBlogThis!Share to TwitterShare to FacebookShare to Pinterest
Labels: General Stupidity