Am I Simon Jester?

We are Simon Jester.

We are not anarchists.

We are not Far-Right or Far-Left. We are the seventy percent in the middle.

We are not Capital “L” libertarians, although we do have sympathies with their platform.

We are neither bitter clingers nor conspiracy nuts.

What we are is a group of folks that think we see liberty and freedom eroding in our beloved United States. We see the policies and agendas of the hirelings in Washington D.C. heading toward an abbreviation if not outright abrogation of the Bill of Rights.

We think that the Federal government is grasping to consolidate power using the current crisis, since as Rahm Emmanuel said, it’s a terrible thing to waste. We think the Federal government, not just this administration, is more interested in self-serving personal, political, and party power than it is in actually doing its best to do the least.

There's a few things in the manifesto that I can't quite get behind, but I agree with 98% of it. I'm not going to let that other 2% get in the way.

Our voice has been ignored, even to the point of telling the citizens of a state that a duly enacted and overwhelmingly voter-approved constitutional amendment would not be allowed to stand due to political correctness.

Our representatives have listened to us on occasion however; only to be overturned by a penstroke from the Executive Branch, like when we said we didn’t like the idea of bailing out the auto industry.

Our legislature has pretended to listen to us about our need to protect our country’s borders, but then come back and tried to tell us that they have changed their minds. All the while trying to curry favor to their own districts with pork projects.

We flood D.C. with calls and letters and emails demanding that the administration not burden our grandchildren with huge government debt that will necessitate huge tax increases, but are told that our thoughts on the matter have no bearing because some things are just too big to fail; only to hear the same legislators come back a few months later and demand punitive taxes on those companies it gave money to against our wishes.

The current administration has appointed all of these extra-constitutional “Czars” to oversee what they view as problems in our country and in our world, including an avowed Communist.

This administration, as well as far too many legislators, clings to a philosophy of man-made global warming that is far from settled science and has decided that “Cap and Trade”, regardless of the huge burden that will place on the consumers, is necessary to limit carbon emissions. The fact that it has been tried in Europe and FAILED to limit carbon emissions doesn’t matter because this program will generate huge tax dollars for the government while at the same time penalizing the consumers of energy in the form of higher energy bills.

Another thing that has failed in Europe and elsewhere is the idea of universal health care. Yet still our government is racing headlong towards rationed medical procedures, diagnostics, medicines, and preventive care because it is yet another way to control the population. It is very hard to tell the government “No” when you or your spouse, or your child, depend upon the government owned and run kidney machine, insulin shots, or cancer treatments.

And now our Federal government has asked for more power. It isn’t even trying to hide it anymore. They want the power to regulate to the point of confiscation the administration of every business in the United States, just for our own financial safety or course. They want to regulate our salaries and compensation. They want to bankrupt the coal industry, which provides eighty (80 !!) percent of all the power in this country. They don’t want us to be able to drill for oil or natural gas. But at the same time they don’t want to allow the transmission of power from wind farms or solar farms across the countryside because they say it will affect the natural beauty of the desert or they don’t want their view cluttered out past Martha’s Vineyard. They want control of the means of production, the type of crops we grow, and the structure and location of the buildings in which we live. And, despite their protestation to the contrary, they want to disarm us. Too much has slipped out about that for them to be able to deny it any more.

And yes, we repeat, they now are asking for more power. This isn’t just theft, it is a bloody strong-arm robbery with a knife in your ribs.

Now, here is where Simon Jester comes in.

This whole thing isn’t about the Democrats or the Republicans, because they are both taking us to the same place and they aren’t afraid of us anymore. It is about our Constitutional form of government. The Rights were there before the words were written, for they are inherent in all people. They don’t come from government; government, no matter how hard it tries, cannot dissolve them. Now, here we the people are, having all these Tea Parties, trying to show our government that we, the seventy percent or so of the country who is right smack dab in the middle trying to raise our families and give our children better lives than we had, are tired of this grab for power. These Tea Parties, where no one actually throws anything in the harbor, are getting hardly any coverage from the press. In fact, the TWO counter protestors at the March Tea Party in Orlando got as much or more local coverage than the under-reported thousands who attended the rally. So, short of actually committing acts of vandalism and felonious assault, how are we going to get noticed?

Simon Jester. A symbol, since “The Moon is a Harsh Mistress” by Robert A. Heinlein was published in 1966, of dissent against authority. Let the press, and the government, and your neighbors know that you are paying attention to what the Federal government is trying to do. Let someone ask you what that little devil underneath the word “Citizen” across your chest means and then explain it to them. Explain to the one pool reporter who shows up at the next Tea Party that you and Simon have your eyes open and are watching as the government tries to control your life. Explain to your pastor, or your waitress, or your barista at Starbucks, that our government is power hungry and that you and others like you are trying to be heard.

We are Simon Jester. So are they.

And so are you. 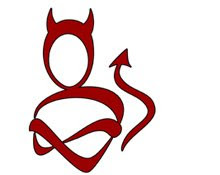 Read who they are, and decide for yourself. I've known that I was fed up with the FedGov power grab for a while. It's time we started pushing the bastards back where they belong. Legally.

Found at The Smallest Minority.
Posted by Ragin' Dave at 03:52
Email ThisBlogThis!Share to TwitterShare to FacebookShare to Pinterest
Labels: THIS is America, What are we going to do?