Bambi will be my BITCH! 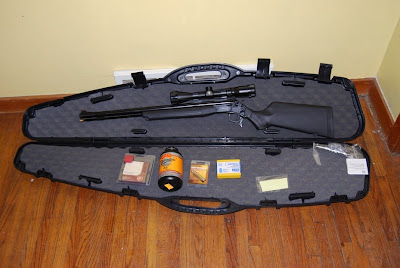 Oh yeah! Uh huh! Got a muzzle loader! It's my birthday!

OK, well, maybe it's not my birthday. But still!

It's too late to go out hunting again; the season was over on the 10th of December. But that gives me time to practice, sight it in and get familiar with it. It came with the scope brand new in the box, never been fired. Unfortunately, using a scope is illegal during muzzle-loader season. But the factory put the iron sights in the case with it, so all I have to do is take the scope off, put the rear sight on, and I'm good to go.

It's a Wolf break-action in .50 caliber. It uses the 209 primers. I've got some miniballs to practice at the range with, but I'll be getting the primo bullets for actual hunting.

Yet another gun for the cabinet. And another season in which to kill Bambi.

As an aside, I had dinner tonight with the gentleman who loaned me that other, non-working muzzle loader. He actually feels quite bad about the whole situation. But the one thing that I took away from it, other than to never use that particular gun again, is that it wasn't me. That is, I was not the reason I didn't get a deer. I had been feeling pretty crappy by that last day. I mean, I hadn't seen a frikkin' thing other than a squirrel or two. Was I doing something wrong? Did I smell wrong? Was I hunting in the wrong places? Hunters, you know how it is - you don't see anything, you get to wondering just what the hell is going on.

Well, it wasn't anything I was doing. Harvest numbers all over the state were down. Lots of reasons for it - weather, date of the hunting seasons, an overly-high estimate of the deer population. But I had a deer so close I could have thrown the gun at it and hit it. So I can hunt. And now I have a gun I can hunt with for another two weeks after the regular season. Oh hell yeah. I'm taking an entire week off for hunting season next year. I'm getting that white-tailed varmint. I WILL HAVE MY VENISON!

THIS! IS! WISCONSIN!
Posted by Ragin' Dave at 23:15
Email ThisBlogThis!Share to TwitterShare to FacebookShare to Pinterest
Labels: 2A, Personal crap