No, not the movie about the basketball players. A cabinet. 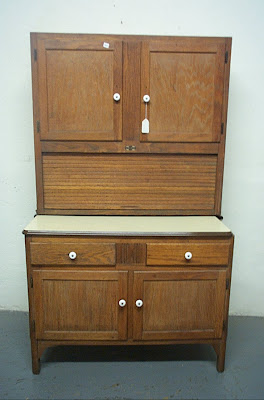 Being that this house is rather old, it doesn't have much of the space that a modern kitchen would have. It would in fact have a hoosier for the kitchen. Kind of a workspace/storage area. Well, the wife went out and bought a hoosier from an antique store. Problem is, we're not the richest folks around, so we had to get one that we knew would require some work to make it usable. The wife found one for about $250. But it's been painted, at least four times, and the last coat is orange. Like, fake hair dye orange. It's ugly as sin. So we'll be stripping that today. And we'll have to use a respirator, because the original paint is still there. And since it was build when it was, that means lead paint. Bad, bad juju. I'd prefer NOT to go insane after it's done, thanks.

One cool point - we opened up the cabinets in it, and found paperwork from the 1920's sitting in there. We'll be keeping those.
Posted by Ragin' Dave at 07:08
Email ThisBlogThis!Share to TwitterShare to FacebookShare to Pinterest
Labels: Personal crap