Especially after seeing this: 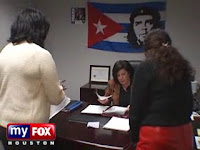 Great Googly Moogly, I knew Obama was a communist, but this just shouts it out for the whole world to see, doesn't it. I mean, nothing quite advertises how you would govern like prominently displaying the flag of a brutal communist dictatorship, with the picture of a murdering thug on it no less.

Yeah, I know it's a campaign HQ, and Obama prolly didn't pick the flag himself. But his supporters did. And they are backing him because he's the most in line with their viewpoints. "The friends you keep" and all that.

Bleagh.....
Posted by Ragin' Dave at 11:38
Email ThisBlogThis!Share to TwitterShare to FacebookShare to Pinterest
Labels: Election 2008