I might have mentioned it before, but there's been this flap over pictures of Jennifer Love Hewitt in a bikini. And people have been calling her "fat". 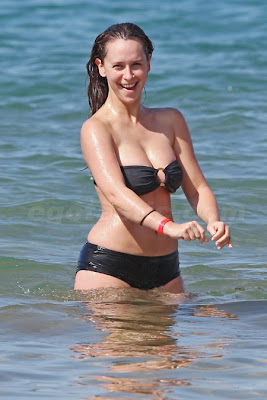 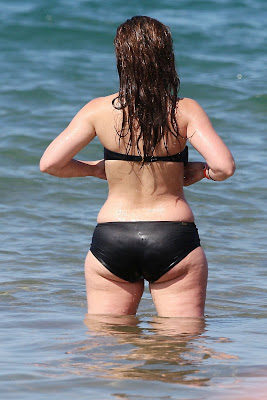 I'm sorry, but that's not a fat woman. At most, that's an unflattering swimsuit. But fat?

Anyone who thinks that Ms. Hewitt there should be considered "fat" is an over-metrosexualized, brainwashed, corncob-up-the-ass nitwit who has spent too much time around modern so-called "fashion", where women are made to look like a designer's object of affection - which is to say that they want their women to look like pre-pubecent boys. Or a strung-out clothesrack look-alike. But here is the chatterati all atwitter because Jennifer Love Hewitt refused to become an anorexic twig. There's a label for the way modern so-called "fashion" models look these days: Heroin Chic. Because that's how they look - like a strung out heroin junkie who hasn't eaten in months. I don't care how many worthless idiots try to tell me that the crack-whore drug addict look is supposed to be sexy. IT IS NOT. Were I single, I would take Ms. Hewitt over any of the skeletal ghouls prancing down a "fashion" walkway. Jennifer Love Hewitt looks as if one could enjoy seafood and a glass of wine with her at night. Modern so-called "fashion" models look like the meth-heads who came into the Addiction Recovery Center at my last job; skinny, strung out and mentally vacant. Jennifer Love Hewitt looks like a healthy, normal person. Modern so-called "fashion" models look like starvation victims from a third-world country.

So, just on the chance that Ms. Hewitt or one of her supporters might read this, here's my advice. Extend your middle finger to all those useless pricks who hurl names at you. Real men want their women to have curves like yours. They don't want some concentration-camp pinup girl.

Now, onto the real world.

This reminder was brought to you by Right Wing News.

Posted by Ragin' Dave at 09:27
Email ThisBlogThis!Share to TwitterShare to FacebookShare to Pinterest
Labels: General Stupidity