Look what the tide washed in ... 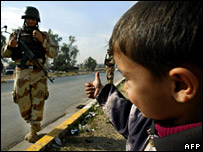 An opinion poll suggests Iraqis are generally optimistic about their lives, in spite of the violence that has plagued Iraq since the US-led invasion.

Their priority for the coming year would be the restoration of security [57%] and the withdrawal of foreign troops [10%].

The BBC News website's World Affairs correspondent, Paul Reynolds, says the survey shows a degree of optimism at variance with the usual depiction of the country as one in total chaos. The findings are more in line with the kind of arguments currently being deployed by US President George W Bush, he says.

Interviewers found that 71% of those questioned said things were currently very or quite good in their personal lives, while 29% found their lives very or quite bad. When asked whether their lives would improve in the coming year, 64% said things would be better and 12% said they expected things to be worse.

They go on to produce the kind of imbecilic spin we have come to know and expect from BDS sufferers. A 10% poll result becomes a "priority." However ...

I think we are seeing the BBC trying to get out in front of the impending apocalyptic disaster: Anglo-American Victory in Iraq.

Posted by Helly at 19:50
Email ThisBlogThis!Share to TwitterShare to FacebookShare to Pinterest