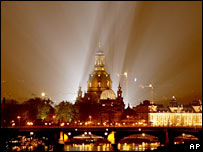 Die Frauenkirche once again dominates the Dresden skyline. The church was reduced to ruble and stayed that way under the communist regime. After reunification, an international effort raised $217 million for the reconstruction. Many of the ruined bits from the original have been built into the new structure as a remembrance.

We have all heard the story and controversy of how Dresden was leveled in 1945. The firestorm killed 35,000 pople. Many feel that level of destruction was uncalled for, but that's over my head. My question is: Can we get our 75,603 troops out of German now? If they can recreate this magnificent monument to peace, it's time to end the occupation.
Posted by Helly at 20:16
Email ThisBlogThis!Share to TwitterShare to FacebookShare to Pinterest